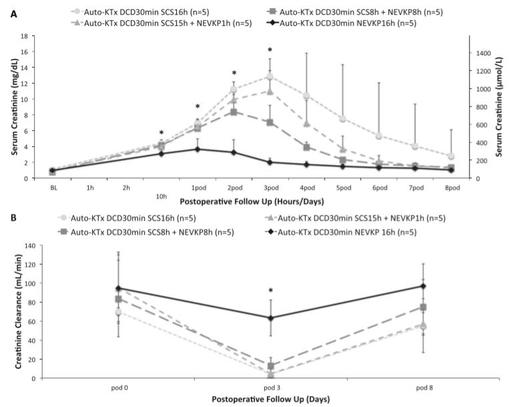 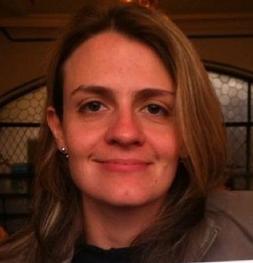 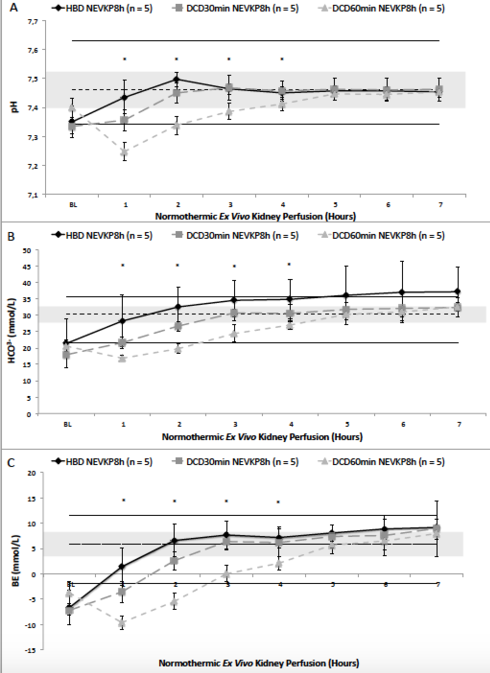 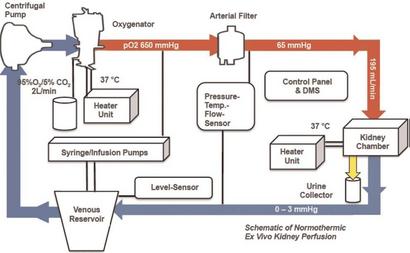 Kidney grafts of lower quality recovered from extended criteria donors (ECD) and donation after circulatory death (DCD) are increasingly used for transplantation to increase the donor pool. However, several studies demonstrate that transplantation of ECD and DCD kidney grafts can lead to increased rates of primary non-function (PNF), delayed graft function (DGF), and reduced long-term outcomes. These outcomes after ECD and DCD kidney transplantation are linked to hypothermic preservation and their poor tolerance to cold ischemia.

Kidney transplantation offers several advantages for patients suffering from end-stage renal disease when compared with dialysis. However, due to a worldwide shortage of organs available for transplantation, current research explores various strategies to increase the pool of deceased donor kidney grafts. Current clinical practice to increase the donor pool and decrease a recipient’s time on the waiting list is to use kidneys donated after circulatory death (DCD). The most widely used preservation techniques are static cold storage (SCS) and hypothermic machine perfusion (HMP), however, deleterious effects on renal graft function have been shown after hypothermic preservation. Therefore, modification of current kidney preservation techniques represents a novel approach to improve renal graft function after DCD kidney transplantation.

This study compared a more physiological, continuous pressure-controlled normothermic ex vivo kidney perfusion (NEVKP) with SCS in a porcine model of DCD autotransplantation. After 30 minutes of warm ischemia, the kidneys were preserved with either 8-hour NEVKP or SCS, followed by a kidney autotransplantation. The renal grafts preserved with NEVKP revealed results of improved renal function and reduced injury compared to SCS following autotransplantation. On post operative days 1 to 7, NEVKP demonstrated lower serum creatinine and urea levels, with a higher creatinine clearance on day 4. NGAL, a specific kidney injury marker, was significantly lower on day 3 after NEVKP versus SCS.

The findings in this study demonstrate that continuous pressure-controlled NEVKP improves renal function in DCD kidney transplantation compared to SCS and may aid in decreasing post-transplant delayed graft function rates. In turn, extending the donor pool by allowing the use of more marginal grafts and reduce the recipient’s waiting list. 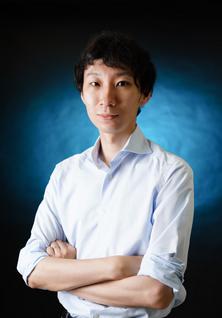 Figure 1.  Schematic of the NEVKP circuit. The circuit consists of neonatal cardiopulmonary bypass technology. The perfusion solution is collected in the venous reservoir. A centrifugal pump propels the solution into the oxygenator, where it is enriched with oxygen and warmed to 37°C. After passing the arterial filter, the perfusate is driven with a pressure of 65 mm Hg through the renal artery into the graft located in the customized double-walled kidney chamber. The venous outflow (0-3 mm Hg) leads the perfusate back into the venous reservoir. Syringe and infusion pumps secure the supply with additional compounds. The urine is collected throughout the perfusion. Control panel and DMS indicate and record perfusion parameters continuously. DMS, Data Management System. 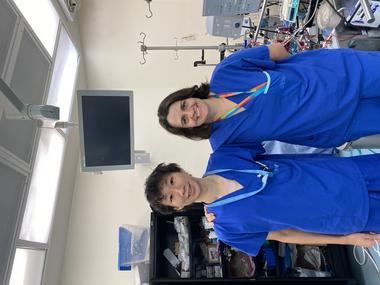 Severe graft shortage represents a major limitation in solid organ transplantation. Kidneys from extended criteria donors (ECD) and donation after circulatory death (DCD) are increasingly used worldwide in order to extend the donor pool. However, delayed graft function (DGF) and primary non function (PNF) represent a major challenge when such organs are transplanted. At this moment assessment of graft quality is done mainly based on the donor characteristics, which results in a high percentage of organ disposal, especially in DCD donors, sometimes also of grafts that might be suitable for transplantation. Normothermic ex vivo kidney perfusion (NEVKP) represents a novel approach for preservation and functional improvement in kidney transplantation. The aim of this study was to investigate whether NEVKP can also offer the possibility to assess different parameters during perfusion, which reflect graft quality and depending on these parameters decide, whether an organ is suitable for transplantation on not. Grafts from three different donor models – (A) noninjured heart-beating donor (HBD) kidneys, (B) moderately injured DCD kidneys, 30 min of warm ischemia (WI) and (C) severely injured DCD kidneys, 60 min of WI – were preserved with 8 hours of continuous NEVKP. After contralateral kidney resection and heterotopic graft autotransplantation, the pigs were followed for 3 days. For analysis, we correlated peak serum creatinine levels, a marker for posttransplantation renal graft function, with perfusion characteristics and clinically available biomarkers. Posttransplantation serum creatinine and serum BUN were significantly different among groups. Also, routinely available assessment parameters such as intrarenal resistance, lactate clearance, acid-based homeostasis (pH, HCO3¯, base excess) and AST were significantly different among groups and correlated with the peak serum creatinine. However, urine production and LDH did not significantly differ among groups and did not correlate with posttransplantation renal function. These data demonstrate that perfusion characteristics during NEVKP correlates with posttransplantation graft function, therefore could be used for graft quality assessment before transplantation. However, a generalisation of the assessment parameters we identified might prove difficult in a different perfusion model. Also, the setup we used only enables a short follow-up, which does not allow an assessment of delayed graft function. Further clinical trials need to asses perfusion parameter thresholds to identify DGF and PNF.

Kidney transplantation is the treatment of choice for patients suffering from end-stage renal disease. It results in lower rates of mortality and higher quality of life when compared to dialysis. As of today, kidneys are the most frequently transplanted organ. However, the organ donor shortage represents a major problem worldwide. Currently, more than 100,000 patients are waiting for a kidney transplant in the United States. Therefore, research focuses on increasing the donor pool by making more grafts available for transplantation.

Current storage techniques for kidneys prior to transplantation are based on cold temperatures, which are known to be cause injury to renal grafts during the storage period. Prolonged storage times, which are sometimes necessary, can affect the patients’ outcome negatively following kidney transplantation. Furthermore, cold techniques do not allow the assessment or improvement of renal grafts during storage, as the graft is metabolically inactive. Therefore, we have developed a novel storage technique – called normothermic ex vivo kidney perfusion- that provides a more physiologic surrounding for the renal graft from recovery until transplantation. In a recently published manuscript in the journal “Transplantation”, we could demonstrate that normothermic kidney graft preservation is feasible and safe in good quality organs. Porcine kidneys were recovered and either stored on ice (common technique) or stored with our novel perfusion technique at normal temperatures providing oxygen and nutrition. Following  transplantation, pigs that received kidneys storage using our novel technique demonstrated superior outcomes when compared to kidneys stored with the currently established technique of cold storage.

Our findings demonstrate that normothermic ex vivo kidney perfusion can be safely used in kidney transplantation. Based on these results we will initiate a clinical trial at the Toronto General Hospital, allowing the progression towards a larger donor pool and ultimately reducing the gap between supply and demand for renal grafts.