High success rates of liver transplantation have increased the gap between the supply and demand for life saving organs. Waiting lists continue to increase as the number of patients in need of an organ die or drop out of the list due to disease progression. The use of organs from donation after cardiac death (DCD) has become a tool to increase the donor pool. However, DCD grafts present a high rate of ischemic type biliary strictures, a complication resulting from low blood supply to the donor graft prior to procurement that worsens exponentially with static cold storage (storing the organs on ice at 4ºC). This complication results in high morbidity and mortality in DCD liver transplant recipients, manifesting as leaks or obstruction to the biliary conducts of the newly transplanted graft.

Static cold storage is the current standard preservation method used worldwide to store organs before transplantation. We have developed normothermic ex vivo liver perfusion (NEVLP) as an alternative strategy to store, assess and treat grafts before transplantation.  This study determined whether hepatocyte and bile duct injury can be improved by NEVLP, in comparison to cold storage.

A porcine model of DCD liver injury was used for the study. Livers were either cold stored for a period of 4 hours, or cold stored for 4 hours and then perfused for 8 hours in our NEVLP machine. Transplantation was simulated by reperfusion with diluted blood. Cold stored livers had higher markers of ischemic injury, decreased oxygen extraction, lower bile quality and increased hepatocyte necrosis compared to their NEVLP treated counterparts. Bile duct vascular flow was assessed by CT angiography in all livers. Cold stored grafts had significant loss of arterial perfusion of the liver tissue whereas arterial blood flow was preserved in livers preserved by normothermic perfusion.

In this study we found acellular normothermic perfusion to be a promising technique for the storage, assessment, and repair of DCD liver grafts. This technique shows improvement in the markers of bile and hepatocyte injury and enhances arterial perfusion to the liver. 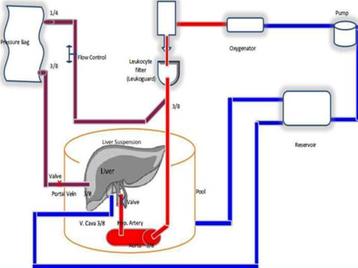 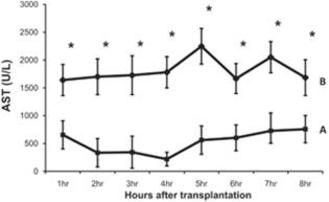 Donation after cardiac death (DCD) grafts are a useful tool to increase the supply of organs to patients on the transplant wait list. However, recipients from these grafts are more prone to biliary complications, known as ischemic type biliary strictures. Long periods of static cold storage are deleterious to DCD grafts, as the biliary epithelium suffers more damage while resting for long periods of time on ice. Moreover, DCD grafts preserved with cold storage are associated with a 20 – 40% of ischemic-type biliary stricture rate.

These and other limitations on the use of DCD grafts have motivated a special interest in normothermic and subnormothermic perfused liver preservation. Ex vivo machine perfusion avoids the negative effects of cooling and offers the opportunity to assess liver function at physiological or close-to physiological temperatures. Maintaining an adequate vascular flow throughout the biliary epithelium may prevent the occurrence of biliary complications.

This study used a porcine liver transplantation model to compare subnormothermic ex vivo liver perfusion (SNEVLP) with cold storage for the prevention of ischemic type biliary strictures. After DCD procurement, liver grafts were either stored on ice for 10 hours (static cold storage at 4ºC), or preserved with 7-hour cold storage followed by 3-hour SNEVLP. Livers were then transplanted to recipient pigs. The recipients were followed post operatively for 7 days to assess graft function and biliary injury.

Long term survival between both groups was similar. Markers of biliary injury, such as alkaline phosphatase and bilirubin, were decreased in livers subjected to SNEVLP compared to those stored on ice. Also, lactate dehydrogenase, a biliary injury marker found in bile, was lower in machine perfused livers. Histology analysis revealed severe bile duct injury in 80 % of grafts stored on ice, while SNEVLP grafts showed no signs of injury at pathology examination.
In this study we demonstrated that organ preservation with the combination of cold storage followed by SNEVLP protects DCD liver grafts against ischemic type bile duct injury. Reducing the incidence of bile duct injury could allow to the use DCD liver grafts in a more efficient way and increase the donor pool for liver transplantation.

​​Figure 1. Normothermic Ex Vivo Liver Perfusion (NEVLP) circuit. The circuit consists of a centrifugal pump, an oxygenator and a heater, resulting in an oxygen tension of 600 mHg at 38°C. The perfusate passes through a leukocyte filter to remove inflammatory cells. The liver is perfused via the hepatic artery with a pressure of 60–80 mmHg resulting in an arterial flow of 250–400 mL/min. The portal vein is perfused by gravity with a pressure of 4–8 mmHg resulting in a portal flow of 900 mL/min. 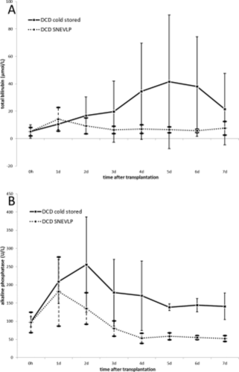 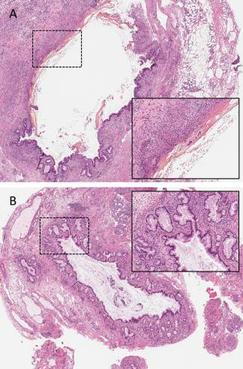 Cold storage and subnormothermic ex vivo liver perfusion (SNEVLP) were compared using a heart beating donation porcine liver transplant model. Grafts were either cold stored in standard preservation solution for a period of 6 hours, cold stored in modified preservation solution containing ex vivo perfusion additives for a period of 6 hours, or preserved with a sequence of 3 hours of cold storage and 3 hours of SNEVLP. Recipient pigs were followed until the fourth postoperative day.

No differences were seen regarding overall survival of all specimens. Grafts subjected to SNEVLP presented less ischemia reperfusion injury, shown by lower levels of aspartate aminotransferase (AST) during the post operative period. Also, markers of bile duct injury such as alkaline phosphatase and bilirubin were lower in the SNEVLP treatment as compared to the other two cold storage groups. Hyaluronic acid, a marker of endothelial cell function, was markedly improved in perfused livers compared to those stored on ice. Adding the SNEVLP components to the cold preservation solution had no impact on liver function or injury.

This study provides supporting data regarding the safety of warm machine perfusion on standard criteria grafts. Future goals of ex vivo perfusion include graft modification with mesenchymal stem cells, immunomodulation therapy to prevent rejection after transplantation, and prevention of disease recurrence such as hepatitis C virus or hepatocellular carcinoma. These strategies are not only limited to application in marginal grafts, in fact they are more practical in standard quality grafts.

All efforts are now focused on our first human clinical trial of warm ex vivo liver perfusion in North America. With the safety of ex vivo perfusion on standard criteria grafts assured, it is possible to translate the findings of our research lab into clinical practice, allowing another major step towards increasing the organ donor pool.

Figure 2. Hylauronic acid levels measured in serum of pigs after transplantation with livers preserved with cold storage (CS) or warm perfusion (SNEVLP). Hyaluronic Acid is used as a marker of endothelial cell lining functionality and is shown to be increased in animals receiving a cold‐stored liver graft (CS‐1 and CS‐2) as compared to pigs receiving a graft preserved by the SNEVLP protocol, suggesting improved EC preservation in the SNEVLP group (* significant difference). 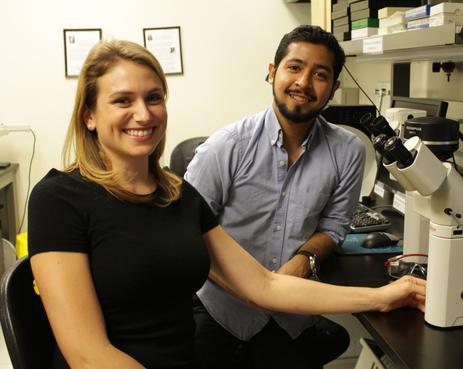 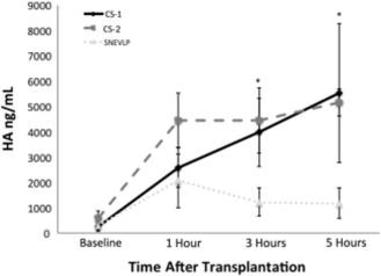