Dr Samrat Ray (MBBS,MS,DrNB) completed his medical school from University College of Medical Sciences, Delhi University, New Delhi and passed with distinction and gold medal in 2010 followed by residency in general surgery from Maulana Azad Medical College in New Delhi between 2011-14. Subsequently he completed his super specialty fellowship (DrNB) training in the specialty of Surgical Gastroenterology at the very prestigious Sir Ganga Ram Hospital in 2018. The hospital boasts of being the pioneer in the field of liver transplantation in India, with a track record of producing the stalwarts of Living donor liver transplantation (LDLT) in the country, many of whom are of global recognition. He worked as a consultant/Assistant professor in the same department between 2019-2021 after completing his training, during which he has gained the experience of performing a wide number of upper GI, HPB, lower GI and LDLT operations, with an experience in both open and minimally invasive (laparoscopic) surgeries. He has been credited with performing the first successful liver resection for giant hepatocellular carcinoma in the region of Western Uttar Pradesh(Mathura), India in the year 2019 and also for establishing the first independent Surgical gastroenterology and HPB unit in the same region between 2018-19. He has a wide experience of more than 5 years in being a part of a number of complex living donor liver transplants such as Dual lobe LT, Redo LDLT, Combined liver and kidney transplantation.Besides this,  he has an experience of performing and mentoring clinical research in GI surgical disciplines, with around 35+ publications in various indexed journals of good repute. His biggest contribution to Indian medical research has been his work on analysis of publications from various Indian and South asian medical institutions over a decade in 2016, quoted by the BMJ, Lancet and the Washington post, based on which the National medical council of India suggested reformations in its constitution guidelines in 2021. His core areas of interest include complex HPB surgeries, LDLT and pancreas transplantation, along with mentoring of surgical residents and medical students. 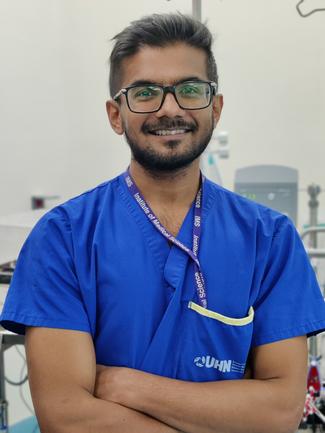